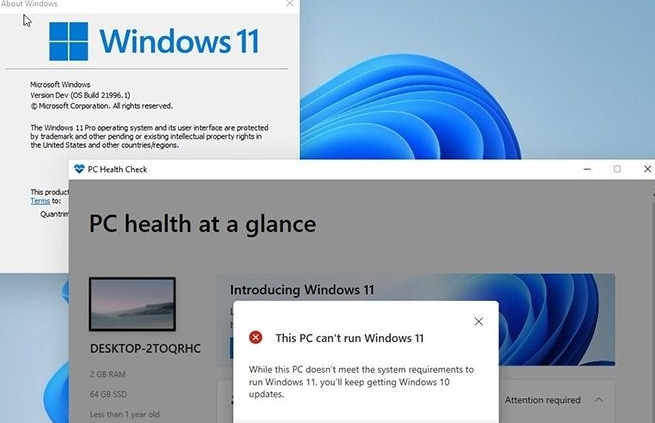 Windows 11 has some specific requirements, and there is a chance that more than two-thirds of PCs won’t be able to update to the new operating system. Here is how to identify why your PC isn’t Windows 11 compatible.

Is my PC compatible for Windows 11?

To help most users know if their device is supported, Microsoft has released the PC Health Check app. However, this application had quite a few problems and did not work correctly. Many people even installed Windows 11 on the machine and tried this tool to check, but still received a message that the machine could not install Windows 11.

Microsoft has checked and updated its PC Health Check app recently. They did identify a set of PC models that meet the principles while running on Intel 7th Gen processors that did not originally include in the minimum system requirements. Based on those findings, they have expanded the list of compatible 64-bit processors to include the following:

Representatives of Microsoft also acknowledged that they missed an opportunity to provide clarity and accuracy through the PC Health Check app.

Prior to the update of Microsoft PC Health Check app, the most reliable and quick way to see whether your PC is compatible for Windows 11 is using WhynotWin11 – an open-source code made by Robert Maehl.

WhyNotWin11 will check if you are eligible to upgrade to the new Windows 11 operating system, according to all relevant criteria. The application has been updated several times to reflect changes in Microsoft.

This application will help enthusiastic users to detect any incompatibility issues, so that they can easily find a fix before upgrading to Windows 11.

Microsoft will not stop you from installing Windows 11 on older CPUs but you won’t get updates. Microsoft has updated its supported CPU list for Windows 11 with new processor line-up’s from Intel. For those happy to install Windows manually, the actual minimum Windows 11 specs mean that CPU generations don’t matter, as long as you have a 64-bit 1GHz processor with two or more cores, 4GB of RAM, and 64GB of storage. Windows 11 will now run on older CPUs.

Hence, any computer with Intel’s 4th Gen processors or above would be able to run Windows 11, as the only new requirement mentioned by Microsoft was Intel’s Trusted Platform Module 2.0. The i3 4th Gen is also compatible by this rule.

What if my PC is not compatible with Windows 11?

Since processor and TPM are usually not compatible, it may mean that you need to buy a new motherboard and processor at the very least to make the device compatible; this is not an option for notebooks and other devices with fixed hardware components. Buying a new PC is another option.

Still, I recommend to stay at Windows 10, as Microsoft will provide long-term update and improvement for this stable OS.

No comments to show.